Why Your Electric Shower is Running Cold 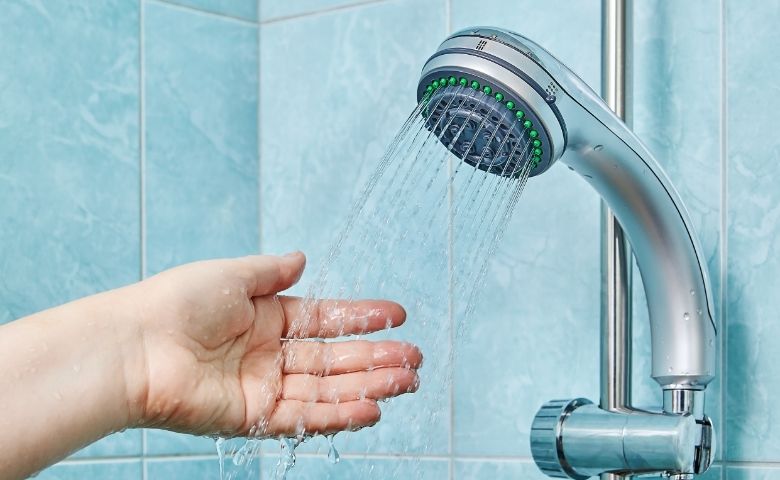 Prior to the invention of the electric shower, most homes had an electric water heater from which you could fill a bath or connect a shower hose to bath taps to get washed.

If you’re as old as me, you’ll remember that the hot water from the tank would run out quickly, and it took ages to heat back up. Those big hot-water tank heaters worked, but they really aren’t very efficient.

A lot of water and power gets wasted when you try to store a huge tank of consistently hot water, and that’s why it makes more sense to heat small amounts of water on an as-needed basis. Enter – the electric shower!

As great as electric showers are – (and how far they’ve come)  – they’re machines, and like all machines, are prone to malfunction from time to time.

One of the most common faults we hear people complain about is that their electric shower has stopped heating water – it’s either tepid or freezing cold. So, we’ve created a guide that explores three things that could be causing your shower to run cold, and how to fix them.

What Is An Electric Shower?

An electric shower is usually a plastic housing that is mounted on the wall of the shower. A shower head will be connected to that box with a hose. The design is relatively simple, as is the way it works: Cold water is drawn in through an intake port, passes through a heating element, and comes out the shower head hot. But as you’ve probably discovered, this process can get interrupted by faults.

A dual metal-wire heating element setup is used to heat the water and send it through the hose to the showerhead. Thus, these machines basically consist of two water pumps, a chamber, and two (sometimes three) heating elements. It may look like a complex piece of work, but there isn’t really that much going on here.

Why Is Your Electric Shower Failing To Heat?

Now that you understand a little bit more about these devices, let’s discuss the important stuff: You are probably here because your electric shower is failing to heat water properly. Let’s look at the most common causes.

As we said earlier, this is a fairly simple device with a limited number of working parts. As such, a failure to heat water can be attributed to one of three likely causes:

The heating element is the part which actually heats the water, so it is your most likely culprit. If the electric shower is still pumping out the same volume of water, that means everything is functioning properly…except that the water is cold, instead of hot.

You can’t repair a burned-out heating element, like you can’t repair a blown light bulb. You simply have to get a replacement part and throw the old element away. Most models will have two of these elements and they might not go bad at the same time. Nevertheless, it’s better to replace them in pairs.

The thermal cut-off switch is a simple safety mechanism that is found in virtually all electric showers. In the event that the water gets too hot, this switch cuts off the heating element to prevent it from scalding the user. Without this feature, using an electric shower might very well involve some serious burns.

However, sometimes it does its job a little too well. Other times, it simply stops working entirely.

Clogging is a frequent problem, especially if you have been using your electric shower for a long time. If you have never opened the device and given it a good cleaning, a clog could very well be the issue. In many areas, the water naturally contains a lot of hard minerals which can accumulate in pipes and leave a chalky residue. When this builds up to a certain point, it can impede or even stop the flow of water from your shower.

Also, check the hose for damage or kinks, as this can cause restriction to water flow.

Fixing An Electric Shower That Fails To Heat

We will assume that your issue is caused by one of the three causes listed above. You’ll have to rest or repair one at a time. So, let’s begin by testing the heating element, as it is the most likely culprit.

Do not attempt any electrical work without consulting a professional electrician. In fact, we recommend you hire a qualified electrician to carry out this check and repair.

Make absolutely sure that there is no power going to the electric shower before you begin. Most models will have an isolation switch of some kind, but that just isn’t good enough to trust with your life. Cut the power by flipping the relevant breaker at the mains, plus switch off the isolator switch to double up on safety, then test the wire ends with a multimeter just to make sure nothing is live.

Once you remove the cover, you should see the water tank, which is usually cylindrical. The heating elements will be inside of there. You will also notice that the tank has wires leading into the top, some of which power the heating elements.

This will usually be a blue wire and a black wire. Touch your positive multimeter probe to the black wire while touching your negative probe to the blue wire. Instead of testing current, test resistance. It should be in the range of 10-20. If you get little to no resistance, the heating element needs to be replaced.

If your heating element is broken, contact your manufacturer and order a new one, if it looks all good, your next step is to test the thermal cut-off.

Fixing the Thermal Cut off Switch

This is just a simple button-like device that is normally located near the top of the tank. This time, instead of testing resistance, check continuity. Once you have located this device, the test is really simple. Put the ends of your multimeter probes against either side of the cut-off switch and see if it tests positive. If not, the cut-off needs to be replaced. If none of that works, and if your water flow is reduced/stopped, you will just need to give the whole device a good cleaning.

You think of your shower as always being clean, since water is running through it and it’s self cleaning as your shower. However, gunk, limescale and mould can build up inside the shower head, blocking the spray nozzles, which creates back pressure and may be activating the pressure release valve.

This is more common in older showers, but no matter the shower age, you should be cleaning the shower head regularly to prevent any blockages, ensuring water flows freely.

If your electric shower problems are caused by something other than these three issues, it’s time to call in the professionals. You might even want to send your electric shower back to the manufacturer for service (if possible). In any case, you certainly shouldn’t do something with which you aren’t comfortable, as this could lead to making the problem worse. Still, for those who are even a little bit mechanically inclined, this guide gives some of the go-to troubleshooting points when your shower is playing up..