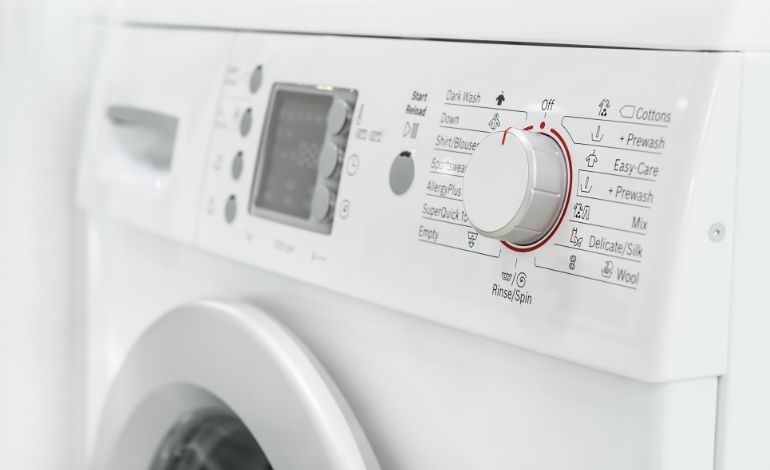 Clothing and other machine-washable fabrics, like bedding and towels, are made from different textiles and require their own specific washing, drying, and ironing techniques. To provide you will instructions on how to best manage these fabrics, they have labels with laundry symbols.

Washing machines also have symbols that describe specific functions and programs of the machine, but for a lot of people, these read like indecipherable hieroglyphics. Most of these symbols are the same or very similar across brands and have not changed over the decades, which makes understanding them easier.

In this guide, we explain what all the symbols mean on the front of your washing machine, giving you a complete understanding, so you can get the most from your machine.

The symbol for the prewash consists of a tub and a vertical line in the middle that does not touch the tub. It is mainly used for soaking heavily soiled or dense fabrics such as curtains. It is often shown with a temperature gauge.

The symbol for the prewash consists of a tub and two vertical lines in the middle that do not touch the tub. As with the prewash, a temperature display for the washing temperature can be displayed next to the main wash. It denotes the longest part of the full wash cycle.

Three characters are used for flushing.

The first and third variants are most often used. The second variant also appears as one of the symbols for hand washing. If your washing machine does not have either the 1st or 3rd characters, you should look for a half-full tub. If this is also not listed, your device probably does not support this function. Rinsing is necessary to remove the detergent from the machine.

The symbol for the fabric softener is a stylized flower with five leaves, which is depicted either alone or in a tub that can be empty or filled with water (wavy line). This symbol shows when and if fabric softener is used at all.

Symbols on the washing machine, prewash to fabric softener

There is a spiral for spinning which, depending on the manufacturer, points to the right or left. If the spiral is either crossed out with an X or the lines broken several times, the machine does not spin. The spin cycle ensures that excess water is thrown out of the clothing so that you do not have to take it out of the machine dripping wet.

Tip: In addition to classic spinning, modern machines also have a symbol for fine spinning. In this case, the spiral sits over a tub with a wavy line in the middle.

If the symbols on your washing machine have a tap, you can tell whether water is being pumped into the machine. The faucet can be directed to the right or left, sometimes a drop is also drawn directly on the faucet to clarify the function. Some machines have a variant of this symbol with a line through them, which means that water cannot run into the machine. Some manufacturers only use one or both symbols.

This symbol is a bit tricky as it can easily be confused with the sign for expressing separately. If the washing machine uses less water, for example, due to a special program, a tub is displayed that is half full with water. An arrow at the bottom of the vat then points downwards. This symbol is rarely used these days, so it will mostly be about pumping, not using less water. Most modern machines handle this by themselves.

The symbol for draining (pumping water out) looks the same as that for using less water, but the water level in the vat is different. This is shown on the bottom of the vat. The vat is rarely completely filled. However, the arrow always points downwards. The symbol is often used together with the spin symbol and indicates that the water will be pumped out after the spin cycle, which is the last step before opening the washing machine door.

A reduced speed is sometimes shown behind the spin symbol in the form of a fraction 1/2. This symbol was mainly used in the past and is hardly used anymore due to the current possibility of setting the spin speed yourself. However, you must make sure that this symbol comes after the spin symbol.

There are actually no symbols for the washing temperature. However, every washing machine has a number of temperature readings listed on the front that show exactly how high it will be during the wash cycle.

The symbols for short quick programs are very diverse and are often “designed” by the manufacturer. However, there are some that are used by most.

Please note that not all manufacturers use a symbol for short programs.

The symbol for a cold wash, i.e. the use of unheated water straight from the tap, is represented by a snowflake or a snow crystal.

The symbol for hot laundry is a heavily soiled top with long or short sleeves. Usually, the stain is on the left side of the top. Not all manufacturers use it. Likewise, whites are represented by an empty arrow with a number inside the arrow. Mostly these are hot wash programs that wash at 45 ° C or 60 ° C. Another symbol for boil laundry is a sign that reminds of an opened cotton boll that is viewed from the front.

As described above, the second variant can be confused with the symbol for rinsing. Modern washing machines mostly use variant 1, as this clearly indicates hand washing. So always keep an eye out for the hand.

The symbol for washing programs for woollen clothing is indicated on the washing machine with the official woollen seal. This is managed by the Australian subsidiary Australian Wool Innovation Limited and presents stylized cotton fibres that are still on the plant. Curved lines are used for this. Sometimes the English word for wool, “wool”, is under the sign.

The program for silk is characterized by a silk scarf that has been folded once, one side of which is longer than the other. This symbol is quite new and is mainly offered as a function by modern devices. Often the word “silk” is right next to or below the symbol.

Tip: One advantage of the silk program is the option to gently wash linen and viscose with it. However, you should not wash these fabrics together.

The symbol for delicates is a laundry tub that is filled with water and has an arrow pointing upwards. This means that more water is used to gently wash the laundry. A feather can also be used for delicates, which also corresponds to the sensitive symbol.

Programs for delicate fabrics other than silk are displayed with a stylized butterfly in various designs, either from above or, more rarely, from the side. Not every manufacturer uses the symbol.

Symbols on the washing machine, hand wash to delicate wash

The symbol for so-called sensitive programs is a spring that can be clearly recognized, even if each manufacturer uses a different variant.

The symbol for synthetic fabrics is reminiscent of an Erlenmeyer flask connected to a tube that points either to the right or to the left.

The eco symbol is always shown as E, but in different variants. It used to be a simple capital “E”, while a lowercase e is used today. Depending on the manufacturer, this can be shown with or without a curved line, similar to the @ symbol. Earlier machines that were equipped with special eco programs were given a different symbol. This was a laundry tub that was filled with a large star made up of three lines.

In old washing machines, there was an energy-saving mode that is now taken over by the machines themselves or can be set by you. The old energy-saving mode was shown as a capital “E”, similar to the eco symbol. This is no longer used in itself today. However, a small “e” with a curved line can also stand for energy-saving mode. If there is a connector at the end of the curved line, this is clear.

Also one of the old symbols was the display for dripping wet laundry. This symbol is represented by a washtub with two lines. An asterisk, *, is shown between the two lines. The symbol is intended to make it clear that the laundry remains in the water for longer.

If you have a washer with built-in dryer, a stylized sun shows that the washing machine is drying or that you can use it to add a dryer program.

Symbols on the washing machine, high water level until drying

Jeans programs are shown with a symbol reminiscent of a pair of jeans from behind. Above all, the two rear trouser pockets are clearly visible. Usually, the sign is depicted with a cotton boll.

One or two feathers are often used in lingerie. It differs from manufacturer to manufacturer.

Mixed laundry is indicated by a symbol showing a shirt in front of a t-shirt.

Some machines indicate the antibacterial effect of hot laundry with an extra symbol. This is a magnifying glass in various designs.

Symbols on the washing machine, jeans up antibacterial cleaning

The door lock is indicated by a padlock, which can be either open or closed. If the symbol lights up, you cannot open the door.

Some modern machines have a symbol that represents the head of a pipe wrench. This indicates that maintenance is required.