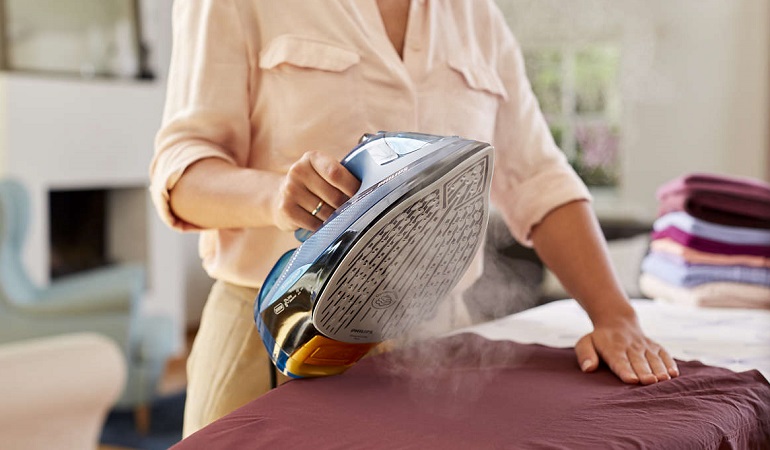 Does the thought of ironing send you into a de-pressin’? Pressing clothes may not be a barrel of laughs, but is a necessity, unless you live in athleisure. Don’t count yourself among the casually attired? You need an iron. But which kind?

Let’s begin with the familiar steam iron. Handheld, these self-contained appliances wrangle the wrinkles out of your clothes with a combination of heat, pressure, and steam, produced by a heating element in an integrated water tank. Steam is released through holes in the soleplate – a heavy, smooth, flat plate that makes contact with clothing.

A steam generator is distinguished from a normal steam iron by a large, separate water tank, which doubles as a base. The iron is connected with a hose to the tank, and is dwarfed in size by the massive water reservoir. Steam generators tend to be costlier and have a large footprint.

Steam Generator Iron or Normal Steam Iron – How to Choose

A steam iron, with its built-in water tank, will always be smaller. Conversely, a steam generator requires considerably more room. If you opt for the latter, prepare to have a table nearby, or a large ironing board.

Despite their size, however, steam generators often weigh less in-hand, since the water – quite a heavy substance, it turns out! – is in a separate tank. Weigh the options (no pun intended), and decide which is more important: a smaller, somewhat heavier steam iron, or a large steam generator that may be easier to use.

If you find operating a regular iron difficult, and have plenty of storage space, opt for a steam generator. If weight is non-issue, space is limited, or if you iron only a small number of garments, a handheld steam iron will be a better, and usually, more economical choice.

Here, a steam generator is a clear winner, with most models able to accommodate 1.8 to 2.2 litres of water—far surpassing even high-capacity steam irons, whose tanks seldom exceed 400 ml. More water means a larger volume of steam—and more ironing with less refilling. Have a lot of clothes to press, or can’t stand stopping to refill a water tank? Go with a steam generator.

It’s entirely possible to spend in excess of £100 on either a regular steam iron, or a steam generator—though less possible to find a steam generator for as little as what an acceptable, entry-level iron costs. Steam generators are, by and large, more expensive, with some of the priciest exceeding £300. On a tight budget?

Your pound will go farther with a steam iron. Money no object? Choose whichever best suits your needs.

A steam generator will make short work of heavily creased garments or a big pile of laundry – the large water tank and sheer quantity of steam mean more ironing between refills. But is a steam generator more powerful or effective? Not always.

Many steam irons emit a respectable quantity of steam and include a steam shot feature that helps relax fibres and remove stubborn wrinkles. There are exceptions, of course – a high-quality steam generator will out-perform a cheaply made iron and vice versa. And some steam generators are pressurized, allowing steam to penetrate the fabric more deeply.

Which is The Best Option?

Which is best – a steam generator iron or a steam iron? The truth is, there’s no one right answer. The correct choice is the iron that’s right for you. Steam generators typically cost more, are bigger, more cumbersome, and hold more water.

They’re the best choice for high-volume pressing or dealing with serious creases – especially when pressurized. Additionally, the lighter weight of the handheld portion of a generator-type iron makes it more suitable for vertically steaming curtains and upholstery – as long as you don’t exceed the reach of the hose.

Steam irons are smaller, heavier, and usually cost less. They’re ideal for low-volume pressing (or those with the patience to refill a water tank more often), small spaces, and lower budgets.

But remember: the size of an iron’s water tank alone does not dictate overall performance. Continuous steam, and a steam shot function, mean that steam irons will suffice for most low- to medium-volume ironing.