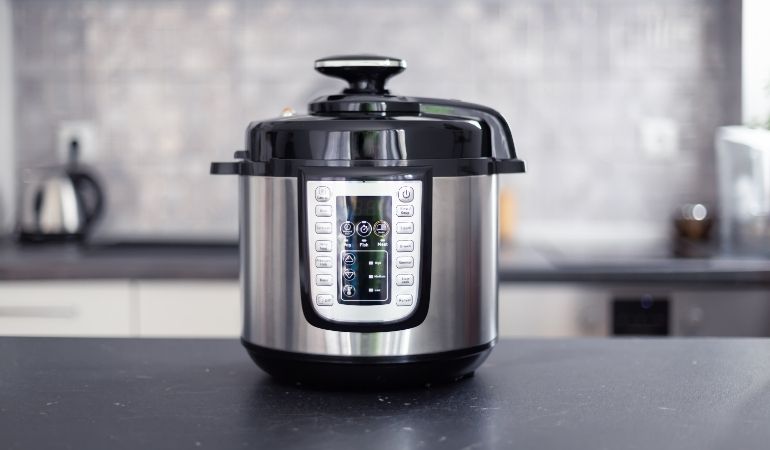 Space and time are things which, for many of us are in short supply—but a person has to eat, small kitchen and busy schedule or not. First came the stovetop and oven.

Actually, first came the firepit, but we won’t go that far back in history. Then, the microwave oven – a massive step up in convenience, but lacking the versatility of a four-burner range.

Today, we have plenty of options, three of which we’ll be exploring and comparing below: multi cookers, air fryers and halogen ovens. These compact, economical, countertop-friendly appliances cook food quickly, and take up relatively little space.

A multi-cooker – sometimes referred to as a crock pot, instant pot or slow cooker – heats and cooks a wide variety of food in a sealed vessel. The heating element – unlike those found in air fryers and halogen ovens—is fully enclosed, making the cooking process more akin to that of a stovetop than an oven.

Multicookers are programmable and perform a wide variety of tasks. Most can simmer, boil, steam, bake, roast, grill, brown, fry, sauté, reheat and keep food warm. Many of the best pot multi cookers feature a manual mode, allowing you to choose your own cooking time and temperature—through the wide range of preset programmes devices make them almost entirely hands-off.

Take a full-size convection oven, and shrink it in size. What do you have (other than a magic trick that ought to have been in one of the Harry Potter movies)? An air fryer. Though they bear little resemblance to a large oven, they operate on the same principle, cooking food by rapidly circulating hot air with a mechanical fan. As heated air moves through the chamber, food is cooked on the inside and sealed on the outside, locking in flavours.

A delicious browning effect can be achieved with a light brushing of cooking oil. The result is a beautiful, crispy, golden-brown coating—much like you’d get by pan- or deep-frying. Food is placed in a cooking basket, and if oil has been used, periodically shaken. Air fryers have time and temperature controls, and many feature preset programmes.

Halogen ovens are interesting and worth adding to this comparison as they cook very similar to air fryers and multi cookers – they operate in a manner similar to that of a convection oven, but utilize a bright, halogen bulb, which functions as the heat source. The bulb is top-mounted, part of the assembly which sits atop the lid. The heating chamber and lid are made of glass, and a circulating fan moves hot air through the chamber, evenly distributing heat.

As compared to multi cookers and air fryers, the controls on a halogen cooker are often basic, consisting only of time and temperature dials—though some higher-end models feature LCD screens, flat, touch-sensitive buttons, and preset cooking programmes. Lids are hinged, or may simply be lifted off.

How Do I Choose Between Multi Cooker and Air Fryer

Still not sure which type of appliance is best for you? That’s alright! We’ll be the first to admit that, at a glance, they seem quite alike. Let’s delve a little deeper to better understand the differences between multi cookers, air fryers and halogen ovens.

On average, halogen ovens tend to cost the least, followed by air fryers, and finally, multicookers—though, with so many products from which to choose, there are exceptions to the rule. Price mostly comes down to complexity, or the lack thereof.

A halogen oven consists of a glass chamber, light bulb, circulating fan, and more often than not, simple controls. Air fryers, though they operate similarly, use a different type of heating element, feature a slide-out basket, and provide more cooking options. Multicookers usually include the most programmes, typically have a robust metal shell, and perform more functions. All this said, you should be able to find a model within any category to suit your budget.

Want just one appliance to do (almost) everything? A multi-cooker is your best choice. From baking and roasting to simmering, sautéing, slow-cooking, pressure cooking and more, a great multi cooker has you covered. But don’t let that dissuade you from trying an air fryer or halogen oven—they can do anything that a convection oven can, albeit on a smaller scale.

Any cooking appliance from an established manufacturer is safe under normal operation. Multi cookers feature locking lids to keep pressure and heat safely contained within. Air fryers and halogen ovens cook without pressure—the only thing to be mindful of is that halogen ovens, with their glass construction, can get hot to the touch.

Which is Best for Cooking Energy Efficiency

Multi cookers, air fryers and halogen ovens are all relatively energy-efficient—though the multi cooker, with its low wattage draw and heat-retaining insulation, is probably the winner. Air fryers and halogen ovens, though they run constantly, usually trump a conventional oven simply by virtue of small size. That said, no two products are the same, and energy savings can vary across the board.

If your busy life and crowded kitchen are cramping your cooking style – if you’re on a budget, or simply looking for a simpler, easier way to cook – consider a multi cooker, air fryer or halogen oven. No matter which you choose, you’ll save space, time and energy, and enter the modern era of cooking appliances.