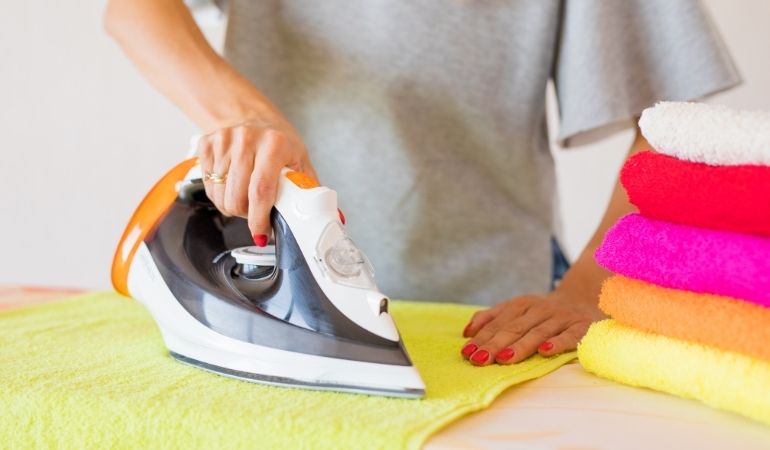 The team here at DIY Dwelling were set the task to handpick the best cordless irons for you, and in this buying guide, we’ve accomplished just that.

Most people would agree that one of the most frustrating things about ironing is having the cord drag across freshly pressed clothes, leaving new wrinkles in its wake.

Having to go back and iron those same areas again prolongs an already time-consuming chore. And what about those annoying knots in the cord that seem to appear out of nowhere?

If you know these frustrations firsthand, perhaps a cordless iron is what you need to make your life easier.

Cordless irons are superior to their frustration-inducing corded counterparts, in several different ways.

With the average iron cord length being just 3m, you’re no longer anchored close to a wall – you can use the iron anywhere in your home. And no cord means there’s nothing to snag on the ironing board or drag across your perfectly fresh ironed clothes.

Going cordless not only makes the process of ironing easier, but it also makes it safer too. You no longer need to worry about small children pulling the cord and having a hot heavy iron fall onto them. And you don’t need to worry about tripping over the cord when you make that dash to answer the phone.

If you’re sold on the idea of switching to a cordless iron, the hard part now is deciding which one to choose (fret not, we’ve taken care of that for you) from the many options available.

What follows is an in-depth breakdown of the features and benefits of the top cordless irons to buy online today, to make the process of choosing the right iron much easier for you.

The Morphy Richards Easy Charge 360 Cordless Steam Iron is a reliable, high-performance iron that falls in line with many other quality cordless irons on the market with its 2400W of power.

This level of power allows the iron to heat up very quickly and generate a generous blast of wrinkle smashing steam.

In fact, it has a lightning-fast charging speed of under 6 seconds and a smart light indicator that tells you when it’s time to recharge. So there’s no wasting time waiting around for it to get hot enough to get started.

The compact charging base lights up steady blue when the iron is ready and will flash red to let you know when it’s time to recharge.

Its light 1.7kg design offers excellent freedom of movement between the charging station and the fabric you’re ironing. Its ceramic soleplate is durable and scratch-resistant allowing it to glide seamlessly over your clothes. And you’ll never have to worry about those sticky scorch marks as the soleplate is scorch-resistant as well.

What makes this cordless iron stand out from all the rest is its vertical steam function. You can hold the iron vertically and use it to steam the wrinkles right out of hanging shirts, dresses, or suits.

Now, you might be wondering why the grams of weight per minute matter. Well, if the steam output is heavy (measured in grams) then the steam can penetrate deep into the fabrics, making crease removal more effective.

When compared to other popular cordless irons, the Morphy Richards Cord-Free iron boasts one of the highest steam outputs.

Morphy Richards has decades of experience in designing and manufacturing ironing products, and the technology in the 303250 model reflects this high level of expertise.

The Tefal Freemove Air Cordless Steam Iron is lightweight with an ergonomic base design to allow for ease and comfort to make ironing less of a chore.

It has an anti-drip feature that will keep water from dripping on and staining your clothes while ironing.

This iron has a safety feature that allows it to turn off automatically if left on its base for 8 minutes. When you’re ready to use it again, simply remove the iron from its base and then replace it again and it will begin charging.

When it has reached full charge, the smart light indicator will alert you that it’s ready for use.

It has a slightly less powerful continuous steam output and steam boost than other cordless irons, but the additional features this iron has that others don’t make up for that in the long run.

The Tower 2-in-1 Cord Cordless Steam Iron has the most powerful continuous steam output and steam boost of the three cordless irons listed in this guide. This iron gives you the option of cordless or corded functionality.

Simply secure the iron to the base for use with a cord, or free it from the base for cordless use. With 2400W power, it heats up in a quick 30 seconds and has a high-quality CeraGlide non-stick ceramic soleplate for a smooth glide while ironing.

It has an anti-drip function, which will protect your clothes from stains. It also has a self-cleaning function, which will make maintenance a breeze for this iron. Included with this iron is a water measuring cup to make filling the water tank much easier and more convenient than other models.

How do Cordless Irons Work?

You might be asking yourself this question in the early stages of your research into this ironing technology. Well, there’s nothing complicated that you need to get your head around, it’s quite simple.

With a traditional electric steam iron, you have a live electrical cable that powers a heating element behind a soleplate.

The intensity of heat is controlled by a thermostat, usually a dial under the handle. Steam is generated by heating water inside a water reservoir, which builds pressure and is released by pressing a “steam” button.

How to Use a Cordless Iron

Most people wonder how the battery can generate such intense heat without running flat.

When ironing clothes (or any fabric) you place the iron down on the metal rest at the bottom of the ironing board each time you want to adjust the fabric to get the next bit of creased fabric into place.

Now, with a cordless iron, instead of placing it on the metallic rest you place the iron on a charging cradle, which keeps the internal rechargeable battery at an optimal power level and able to maximize heat.

Don’t worry, you don’t need to wait for ages for the battery to charge, any good cordless iron will be ready to use and fully charged in a matter of seconds. Also, with some irons like the Philips cordless iron we recommend, the iron and charging stand communicate wirelessly to give feedback on power and charging status.

When shopping for a cordless iron, it can be difficult to decide which one will best suit your needs because while many of them have very similar features, you may not know if some of these features are things you’ll actually need or use, or you may have some confusion when it comes to what the features actually do.

You may even be wondering why you should choose a cordless iron over the traditional corded ones. Here we’ll go over the things you should look for when deciding which iron to buy.

You’ve been using the traditional corded iron most of your adult life, you’re used to it and it’s served you well. In fact, the electric flatiron was invented way back in 1882, it’s a trusty appliance that’s been working well in millions of homes and businesses all over the world.

So why would you want to transition to a cordless iron?

Well, there are a few reasons that a cordless iron may work better for you than traditional iron. The number one reason is the ease of use. With traditional irons, you have the cord that constantly gets in the way.

You have to manoeuvre it just right to prevent the cord from dragging across the areas you’ve just freed of wrinkles and wrinkle them again.

With a cordless iron, the power cord is attached to the charging base so while you’re ironing, you’re free to move the iron any which way you want and don’t have to worry about re-wrinkling your clothes.

Traditional irons are also much heavier and bulkier than their cordless counterparts. Cordless irons are designed with ease of use and portability in mind, so making them lighter weight is beneficial for these reasons.
Steam Output and Steam Boost

When you’re shopping around for a cordless iron, you will want to compare the steam output and steam boost power of the irons. Steam output is measured in grams of steam produced per minute.

The higher the steam output, the faster and more efficiently the iron will remove wrinkles from your clothes. That’s what makes those big steam generator irons so powerful at smoothing out heavily creased clothing, fast.

Most cordless irons have a continuous steam output with the ability to boost that steam output in short bursts to make removing stubborn wrinkles easier. The steam boost is a great feature to have on your cordless iron, especially if you’re trying to iron thicker fabrics like denim.

It is measured in the same way that the steam output is measured and just like with the output, the higher the number, the better.

You’ll also want to consider how much water each iron can hold. The more water it can hold, the longer you can iron without having to stop to refill the tank.

You’ll find most of the better cordless irons have a water tank capacity of between 250ml and 270ml.

Most cordless irons have ceramic soleplates, but you will probably come across a few that have soleplates made of other materials such as stainless steel or titanium. Ceramic soleplates conduct heat very well and glide across nearly all fabrics with ease. They’re also very durable.

However, because ceramic soleplates heat very well, it can be easy to melt some materials such as silk if you aren’t paying attention to the temperature setting.

All the cordless irons recommended in this guide have 2400 watts of power.
You may come across some others that have a lower wattage.

All this means is that the irons with 2400w of power are going to heat up much faster than irons with a lower wattage.

If your goal is to make ironing a much speedier chore, then you’re going to want to go with the higher wattage iron. You will also notice that usually, the irons with a higher wattage are a bit pricier than those with low wattage, so you will want to keep your budget in mind as well when deciding on a higher or lower watt iron.

The Cost of Cordless

As you’re shopping around, you will notice that cordless irons tend to cost a bit more than the traditional corded irons do.

Typically, you can expect to spend anywhere between £30 at the low end to £100 at the high end for a cordless iron, depending on the brand and features of the iron.

Whereas with traditional corded irons you can spend as little as £20, so the higher cost of a cordless iron can be a factor for some.

However, when you consider all the benefits there are with a cordless iron, the additional cost is worth it.

Shopping for an unfamiliar product that is new to you can be intimidating and even frustrating at times because you don’t know the ins and outs of it.

Hopefully, this buying guide has taken away some of that intimidation and has given you some insight into the pros and cons of cordless irons and help in choosing one that is right for you.

As with any other type of product, each cordless iron has a different design and features to offer from model to model. It was our job to separate the wheat from the chaff, and we hope we’ve achieved this by showing you the best cordless steam irons to buy online.