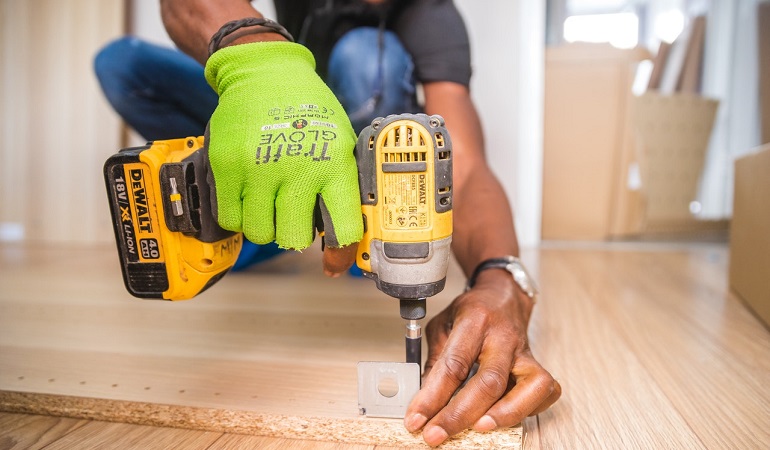 No matter if you’re a DIY enthusiast or professional handyman, a toolkit without a combi drill would hardly be a toolkit in the first place.

But then, there’s a problem. Faced with various options, brand names, and prices to sort through, how do you know if you’re picking the best combi drill for the job, and you’re money?

Considering the money you could be spending on a new drill, it makes sense to do a bit of homework before making that purchase.

That’s where we can help. The DIY Dwelling team have been busy drilling down into the specs of the leading cordless combi drills and compiled a list of the top 5 – enjoy!

Chances are that you’ve already heard of Bosch, and this fame does lead to higher expectations. Thankfully, this combi drill model is not about to disappoint.

With this model, you can choose from either a 1.5Ah battery or a 2.0Ah option. Also, there is an additional accessory kit that will allow you to use this as a screwdriver as well as both normal and impact drilling. Complete with a charger, it takes around 1 hour to fully charge the battery.

When it comes to the torque aspect, then you have a maximum torque of 38Nm along with 20 different settings. In other words, you can effectively change the power rating of this Bosch combi drill depending on what you are using it for. This Bosch combi drill also has a two-speed gearbox while it actively monitors the power drainage while in use to provide you with a drill that will last for longer than other models.

This model has a number of real positives. First, it weighs only 1.3kg but still packs a real punch with a maximum of 1350rpm. It also has an integrated LED light to allow you to see what is going on even in dark corners. Changing bits is made easier with a keyless chuck while the entire drill has been ergonomically designed so it fits nicely in your hand and feels balanced at the same time.

Makita is a highly respected tool manufacturer and this combi drill model is a perfect example of why they have built up such a reputation. This combi drill kit contains everything you will ever need as it comes with a huge number of accessories and drill bits for every eventuality. You also receive two 18v Li-ion batteries along with a charger, so you should never find yourself running out of power.

Weighing 1.7kg, makes it’s quite lightweight, and with 300 watts of power, this Makita combi drill has a maximum noise level of 92 decibels which is pretty standard. Also, the drill is easy to control with variable speed as well as an electric brake. Throw in 16 torque settings and a keyless chuck, and what you have is a combi drill that may sound complex, but the opposite is true.

Perhaps the only downside is that it doesn’t come with any LED lights. However, that in itself is not a disaster.

Overall, this Makita Cordless Combi Drill is rugged, lightweight, and packs a punch, without breaking the bank.

The first thing that strikes you with this particular combi drill is the price as Black & Decker have aimed this at the budget buyer. However, a budget price needn’t equate to a budget drill.

This drill has 10 different torque settings while it can also deliver up to 21000 BPM so it won’t struggle to drill into masonry even though it has that low price tag. The drill is compact in size but does weigh 2.3kg although this is mainly the battery. Also, you only get one 18v Lithium-ion battery with this model, but with a fast charge time that won’t pose too much of a problem. Add in that Black & Decker state that their batteries have fade-free technology so they hold their charge for longer, and having that single battery becomes less important.

As it can be used for a range of DIY projects, the variable speed of anywhere between 0 and 1400rpm is useful. You will find it easy to drill into masonry, wood, and build flat-pack furniture and with its compact size, it is the perfect tool for those of us who hate the idea of trying to deal with a large and cumbersome drill.

DeWalt is often viewed as being one of the go-to brands for professionals, but that is due to its amazing reliability as well as durability. This well-known brand does have a few rather impressive tricks up its sleeve with this combi drill which does make it suitable for people of all levels of DIY knowledge and experience.

This model has an electronic brake and a maximum drill capacity of 30mm into wood and an impressive 13mm into concrete or steel. It can drill into steel with ease thanks to a maximum torque of 42Nm when on the hammer setting. With torque, you also have 15 different settings which are easy to move between depending on your needs.

For speed, it has two settings but the cool part is the intelligent trigger. Thanks to the way in which it senses pressure, it provides you with greater control over the speed and power being used at any one time.

The other key features with this model that make it one of the best combi drills on the market include an LED light and that the battery is part of their special Lithium-Ion series. This involves their own technology to provide you with a battery that is far more efficient which lets you carry on with your DIY project for longer. Also, all of this weighs 1.72kg, so it’s not the heaviest of drills making it quite comfortable to hold and use even for longer periods of time.

Terratek may not be one of the first names that you think about when searching for a combi drill, but with its low price, it can easily be overlooked. To be honest, this drill is packed full of features, some of which you would only expect to find on a more expensive brand.

Not only do you get a 13pc accessories kit, but the drill itself has a battery that starts off at 20v when fully charged before dropping to 18v. Charging the battery will then only take just over 3 hours to get it back up to 100%.

This model has a variable power trigger offering greater control. Also, it can work up to a maximum speed of 650rpm which is powerful enough for the majority of projects for the amateur DIY enthusiast. 16 different torque settings will allow you to use the drill in more situations while the keyless chuck lets you change the drill bit in an instant.

While this combi drill may not have the same rpm like other brands, unless you are going to be drilling into concrete and masonry on a regular basis, then this won’t pose much of a problem. Also, as the entire drill weighs only 1kg, and also has an LED light built into it, then you do get a whole lot of drill for not much money.

The five models discussed earlier are all fantastic combi drills in their own right, but let’s get to the bones of how to select the right combi drill for your needs.

Be aware of what is included with the drill that you are buying. Generally, they come in three different packages.

Now, you may wonder why you would buy just the drill driver and no battery. That is because items such as the Black & Decker model mentioned earlier use the same battery across their power tool range. If you already own another tool and they use a Lithium-ion battery, then chances are the battery will also work with your combi drill.

It’s easy to be blinded by the promise of so many accessories when buying a kit, but it’s the drill itself that is important.

A combi drill not only has the drill and screwdriver aspect but it also contains a hammer mode. This will allow you to drill into hard materials such as concrete without too many problems. So, if you anticipate that you will need to carry out some DIY that involves some type of masonry, then having a drill complete with the hammer motion is essential.

Having these different options does mean a combi drill is more of a multi-functional tool.

Also, try to go for a combi drill that has more power. This does make a difference with the hammer aspect and drilling into tougher materials. For the battery, then double-check the charge time and stick predominantly to a Lithium-ion battery. They offer better power storage and are more efficient while different manufacturers also include their own battery technology to further enhance that ability to store charge for longer.

While being side-tracked with the promise of a huge number of accessories isn’t required, being aware of the different drill bits is still important. Clearly, a combi drill will require different accessories that will allow you to take full advantage of what it can do. A range of different screwdriver heads, sizes of drill bits for making various holes, and also drill bits for wood, masonry, or concrete are all required.

There are several important factors to think about with power and your combi drill. If you are concerned about having to drill into those harder materials, then torque will play a role. Torque refers to the rotary power of the drill. The higher it is, then the more force that can be applied allowing you to drill into concrete or steel with relative ease.

Changing settings, as well as the ability to control power through the trigger, will be preferential for anybody who may be using their combi drill for this purpose rather than the hammer function.

Other power options to focus on including the voltage of the battery, and it’s recommended to stick with 18V as well as the RPM. The higher the number, then the greater the ability for the drill to be effective in more situations.

Finally, as you check out the best combi drills on the market, you may see that a number of other features are included in various models. An in-built LED light could certainly be useful. If you see yourself working away in dark corners of your home, then check your drill has this option is a good idea.

Most drills now contain a keyless chuck, but check on the size range first. The two most popular options are 10mm and 13mm. Do note that the 10mm option reduces the size of drill bits you can include so it would be impossible to make those larger holes as a result.

You should also just check the weight of the drill, but make sure it includes the battery. While no drill is deemed as being excessively heavy, there can be some variation. Think about the length of time you will be holding it for and whether or not something at 1.5kg in weight is easier than something at 1.7kg. However, check those power settings as you may be sacrificing on one side in order to reduce the weight.

Always take great care when using a drill, or any home power tool for that matter. Learn how to use a cordless drill safely on some test wood if you’re inexperienced. This will help build confidence or correct technique before working on the surface you need to drill.

The best combi drills are going to be those makes and models that fit in with your needs. Carefully consider what you will be using the drill for and how often. Also, avoid just going by price as that is not always a good indicator.