How to Clean Black Mould Off Bathroom Silicone Sealant 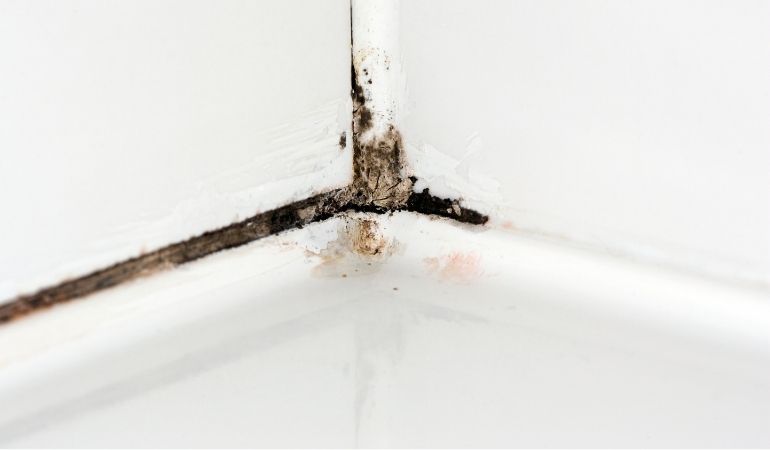 The bathroom is like our little sanctuary, where we can relax and take care of personal hygiene, in peace. But it’s also a playground for things like black mould and bacteria – that’s why supermarket shelves are packed with powerful cleaning agents.

But why is that rarely a problem anywhere else in the house?

Well, that’s because bathrooms offer the perfect environment for mould spores to multiply. There’s always plenty of moisture, while the temperature in there is also nice and warm, making it the perfect growth environment. It doesn’t help that most bathrooms lack proper ventilation, so the conditions in there stay constant, pretty much all year round.

Not to worry, though! In this article, we’re going to look at how you can cope with any mould growing in your bathroom, especially black mould that you’ll often find staining your silicone bathroom sealant all around.

What Is Black Mould?

Let’s start by being clear about what we’re up against, here. Black mould has somewhat of a scary reputation, especially considering how people also refer to it as ‘toxic black mould’.

But what is it, exactly?

Well, it’s a slow-growing microfungus that goes by the scientific name of Stachybotrys chartarum. This microfungus thrives in hot and humid environments like bathrooms, which is why they’re such a common sight, especially on the silicone sealants often used around sinks, bathtubs, showers, and other parts of the toilet.

For most people, this mould is harmless and is simply unsightly. But for some, mould spores can cause allergic reactions. Of course, the less exposure the better, so it’s best to get it under control before growth becomes excessive.

Getting rid of the black mould can be tricky. Overly scrubbing can damage the silicone sealant, which might result in a leak. That leads to water – and the potential for mould – to spread behind walls and under the bath.

Whether you prefer natural, DIY solutions, or supermarket sprays, we’ve got you covered, with methods of cleaning that will make your bathroom’s sealants look brand new.

Here, we’re going to take a look at using natural ingredients – vinegar and baking soda – as our first cleaning method. We’ll then consider your options for ready-made, store-bought solutions that’ll get rid of that mould quickly!

What it is: Vinegar and baking soda is the dynamic duo that you’ll find in almost any guide on household cleaning. For starters, baking soda is a gentle abrasive that can break up practically any stain that it comes into contact with.

Better yet, baking soda also doubles as a way of deodorising any smells on your bathroom surfaces.

It’s partner, vinegar, is also a strong stain remover that’s non-toxic. One of the reasons it’s such a popular alternative to store-bought household cleaners is that vinegar can kill any mould, germs, or other microorganisms that it comes into contact with.

Why it works: There are a few reasons why the vinegar and baking soda combination is particularly effective against black mould on bathroom sealant.

Remember: black mould is a living thing, consisting of microfungi that can grow and multiply. So, cleaning it up isn’t just a matter of wiping it away, but also killing the microorganism and preventing it from reproducing.

Using vinegar and baking soda will not only clear up the mess caused by the black mould, but the vinegar will also kill any of the microfungi that are growing there. The end result? Clean and sanitised bathroom sealant that looks brand new!

How to use it: The mixture that you’ll want to create consists of three things: baking soda, vinegar, and water. So put together two parts baking soda, one part vinegar, one part water, and mix everything together until you get a thick paste.

Next, take that mixture and spread it directly on the black mould, wherever you may find it, and let it dry for a few moments.

Lastly, scrub away all that mould and give the surface a nice wipe down with a wet cloth.

What it is: Suppose you prefer a supermarket method rather than making your own. You’ll be glad to know that there are plenty of mould removal sprays available online or in the supermarket. We highly recommend HG Mould Remover – it’s a fast acting, highly effective spray that kills mould in seconds.

In most cases, you’ll find chemical-based sprays. Those will use ingredients like chlorine-bleached cleaning agents to get the job done. Still, buyers who prefer something gentler can often find mould removal sprays made of natural ingredients, too.

Why it works: Chemical-based mould removal sprays are typically faster-acting than natural ones. Still, they both work in similar ways by killing the black mould fungi and making it easy to remove stains.

To top it all off, you may find that mould removal sprays also include deodorants or fragrances that leave the surface smelling fresh after cleaning.

How to use it: For starters, you’ll want to ensure that your bathroom is well-ventilated by opening the windows and activating the extractor fan. That’s because chemical-based cleaners tend to give off fumes that can leave you feeling unwell.

To maximise airflow, you can also try pointing a fan in the direction of the bathroom to keep the air moving.

You’ll then apply the mould removal spray on the black mould, wherever you may find it. Typically, the sprays will instruct you to leave it for a few moments for the chemicals to work before scrubbing and wiping the surface clean.

To be sure, always refer to the instructions on the spray bottle. They’re generally all the same, though the manufacturer may include specific instructions unique to their product.

There’s a famous saying that goes, ‘prevention is better than cure’. Well, that’s certainly true when it comes to the black mould that you’ll often find on the sealant all over your bathroom surfaces.

The best way to clean mould is to prevent them from forming in the first place. For starters, you can do this by opening the windows often to maximise ventilation and install a good extractor fan. Remember, the warm moisture in the air from your steaming hot shower or math is helping mould grow – extract the dampness.

Besides better airflow, be sure to fix any leaks in your bathroom as well. Tiny, out-of-sight leaks like those under your sink will become prime real estate to black mould spores looking for a place to live.

Finally, if your sealant in heavily stained and is looking worn, it might be a good idea to strip all the silicone out and replace it. Replace with an anti mould silicone sealant such as UniBond which is specially design to prevent mould from growing in the first place.