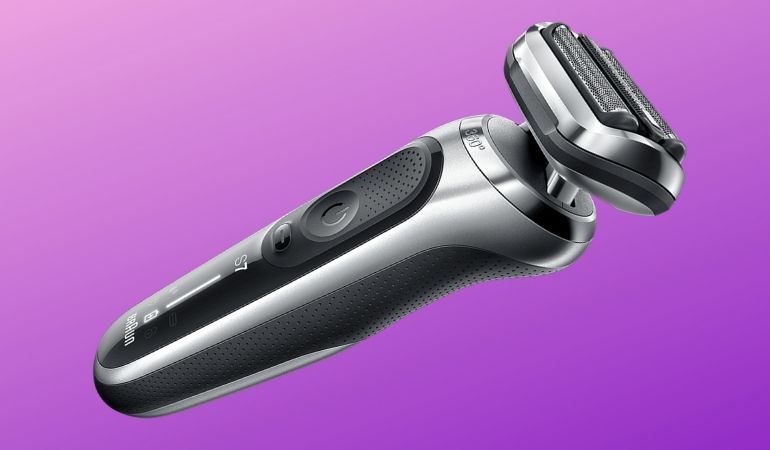 When Braun first released its new range foil headed shavers to the public, they were quickly labelled as a gimmick by purists who believed that nothing could ever replace the modern, tried-and-true rotary electric shaver – certainly not a bunch of blades covered by a layer of perforated foil!

Boy, were the sceptics wrong about Braun’s foil electric shavers.

Cut to today, Braun is the uncrowned leader of electric foil shavers, all premium shavers for that matter, and have an ensemble range of products to boast about.

Braun’s most recent offering, labelled as one of the best electronic razors in the world, is the Series 7 70-n7200cc.

Series 7 was the flagship that improvised on the OptiFoil that was at its nascence in its predecessor, the Series 5.

More importantly, it introduced Pulsonic, Braun’s proprietary beard sensory technology that makes these shavers the go-to choice for all types of shaves.

Today, we take a closer look at the 70-n7200cc and try to discover the reason behind its unwavering popularity, and 5-star customer reviews, even with newer and more advanced products like the Series 9 in the market.

If you have used a Braun electric foil shaver before, you cannot help but notice how similar the 70-n7200 looks to some of the earlier models.

It retains the same aluminium alloy casing in a stunning silver semi-matte finish that remains impervious to scratches and dust. It has a contoured design with rubberized sides that allow you to hold it firmly for precise shaves. Irrespective of whether you are shaving wet or dry, manoeuvring the shaver is made easy.

The base of the unit has the LCD display that alerts you about low battery, as well as about how clogged the shaving head is indicating that it’s time to pop it into the clean and charge station, that uses a cartridge containing an alcohol solution which sterilizes the blade, removing hair stubs, dander and any nasties that may be clinging on to the surface.

The shaver is 100% waterproof. So you can just rinse it under a faucet or carry it into the shower for wet shaving.

Also, you can lock the shaving head to a preset while you are using it in areas that demand precision, for example, under the nose or under the chin.

You can select between five shaving modes that vary in intensity. The lowest one is rightly named sensitive and the highest one is called turbo. Switching between the modes is as easy as pressing a tiny button placed intuitively on the handle.

The shaving head features four different shaving elements that capture beard hair of varying lengths. Clubbed this with the ActiveLift trimmer and you get a smooth and even shave even in areas that normally require multiple passes.

There is minimal skin contact with the blades though thanks to the revamped Opti-Foil which has been doubled in thickness as compared to the earlier models.

This makes this an excellent shaver even for people with sensitive skin.

Almost forgot to mention that the 70-n7200cc features an 8-D contour motion head which pivots both horizontally as well as vertically in 8 different directions.

The Macro Motion allows the shaver to pivot almost 40 degrees allowing you to get as close as 0.5 mm to the skin even if it is a large contouring part of the face. Meanwhile, the Micro Motion which gives each of the four shaving elements their own suspension comes into play during smaller contours.

This gives it unparalleled flexibility that is previously unheard of in foil shavers.

The unit charges in about an hour’s time and gives you 50 minutes of uninterrupted cordless shaving. For those unplanned emergencies when your battery runs out, there’s a five-minute quick charge function that gives the battery enough juice to run for one full shave.

What could be better?

The only possible quibble that we have with the Braun 70-n7200 is that you have to use the clean and charge station after every few uses. While this is not really cumbersome to use, it means that you will need dedicated storage space for the station, which is not very compact to begin with.

Also, you are looking at replacement alcohol cartridges somewhere down the line which will add to the overall expense of owning the shaver.

The Braun 70-n7200cc is a top of the line electric shaver from the Series 7 range. It is easy to use, can be used for a quick shave as well as precise cuts for everyday use, and most importantly, can be used with all skin types.

The very fact that it still outsells the newer Series 9, and receives rave reviews, is testimony to the quality and function.